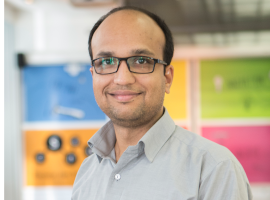 I am an independent Campus Fellow hosted by Dr. Shashi Thutupalli at the Simons Centre in National Centre for Biological Sciences, Bangalore.

I did my Ph.D. from Institute of Pharmacy and Molecular Biotechnology, Heidelberg University, Germany from a Bioorganic Chemistry and Chemical Biology laboratory under the supervision of Andres Jäschke. Prior to that, I completed my masters (M.Sc. Biotechnology) from Indian Institute of Technology Bombay (IIT Bombay, India), with the thesis work on comparative genomics under P. V. Balaji.

I am an experimentalist interested in Origins of Life (OoL) problems. My work revolves around studying RNA catalysis and chemical self-replicating systems using interdisciplinary and high throughput approaches.

During my docotoral work in Heidelberg, Germany, I have evolved serine proteases-like catalytic RNAs (ribozymes) using in vitroselections. I also deciphered their evolutionary trajectories by analysing their RNA libraries using next-generation sequencing.

In my postdoc at ESPCI Paris, I worked on one of the fundamental questions of origins of life: ‘Can life begin with a bunch of interacting molecules forming self-sustaining networks?’. To approach this problem, I built an experimental system using droplet-based microfluidics  combining  with single-cell sequencing (inDrop, Drop-Seq) that enabled the analysis of thousands of autocatalytic RNA networks at an unprecedented resolution.

Here at the Simons Centre, I am working on the exciting problem of experimentally demonstrating the emergence of autocatalytic networks from the library of diverse RNA fragments. To do this I am developing an RNA system which can form heritable autocatalytic networks. I am also developing an experimental strategy through which heritable and functional RNA ensembles (networks) can be selected. Furthermore, in collaboration with the host lab, I am also trying to demonstrate the growth and splitting of prebiotic model cell using autocatalytic RNA networks.

We have a strong OoL network at NCBS that includes Sandeep Krishna and Shashi Thutupalli, who are also trying to understand the emergence of self-replicating systems. I am also interacting with Sudha Rajamani (IISER Pune) and Sanjay Jain (Delhi University) on different OoL problems. Further, I continue to collaborate with Andrew D. Griffiths and Philippe Nghe in Paris, on different aspects of the RNA experimental system.